In this building, a commemorative medallion decorated with an engraved profile of Isabella Nogarola Valmarana bears the date 1566. Isabella herself had signed the construction contracts with the builders in December 1565.
The façade of palazzo Valmarana is one of Palladio's most extraordinary achievements. This is the first example of a solution in which a giant order of pilasters follows the entire vertical extension of a palazzo. The idea evidently stems from Palladio's experimentation with the fronts of religious buildings, such as the almost contemporary façade of the church of San Francesco della Vigna.
As in the church, the stratification of two systems becomes evident in the façade of palazzo Valmarana: the gigantic order of six composite pilasters seems to be superimposed on a minor order of Corinthian pilasters. This occurs in a manner far more evident at the edges, where the absence of the final pilaster reveals the underlying order supporting a bas-relief of a warrior bearing the Valmarana arms. 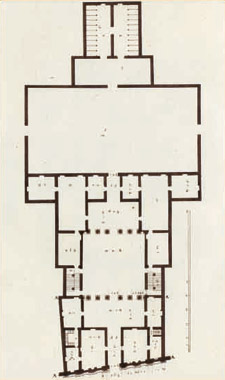